A realisation dawns of the harshness of penal life in such a beautiful place.

In my head this started off as an article titled, "Tasman Peninsula – So Much More Than Just Port Arthur”. I feel many people go to the Tasman Peninsula and visit the Port Arthur Historic Site and miss the so much more the peninsula has to offer.  As I jotted down my thoughts and ideas and did some research I conceded to myself, grudgingly at the time, that an article on Port Arthur should come first.

Why visit there? You may see it as just a bunch of slowly disintegrating ruins (yeah, I know they are the best preserved remains of a convict settlement in Australia and World Heritage listed). Sure it’s a nice setting and has beaut open park-like areas with lovely, mature English trees next to a beautiful bay, but what stands out about it? Do we really want to be reminded of the hardships that previous generations faced? Of the sadness of the harsh conditions that were experienced by those who lived here.

But people are drawn to Port Arthur, with it usually being the most visited tourist site in Tasmania each year.

Stories are told that make the past real.

Stories about people, real people like Dennis Dogherty who was sentenced to seven years transportation and ended up serving about 45 years and receiving 3000 lashes. Henry Singleton who couldn’t seem to stay out of trouble and spent plenty of time in solitary confinement in The Separate Prison, but decided not to use the duplicate set of keys he had made to escape. Young Private Robert Young of the King’s Own Light Infantry who drowned after slipping from a boat as it arrived back at the jetty with the doctor, after convicts had rowed them over to Point Puer and back. David Hoy a skilled ship builder who built up skills in men and helped them turn out fine boats. Learn about William Champ, who as Commandant went to great pains to establish a beautiful garden, and then there was his other claim to fame.

The guides are knowledgeable and informative and it may be their passion or the stories they tell that draw you in.  The stories bring to life that this was home for years for convicts as well as military guards and their families. A realisation dawns of the harshness of penal life in such a beautiful place.  Maybe we leave with gratitude in our hearts that our society has improved since those days.

Port Arthur Historic Site is found at Port Arthur on the Tasman Peninsula, which is about 95km (by road) south east of Hobart, Tasmania’s capital city. You enter the Tasman Peninsula by a narrow isthmus known as Eaglehawk neck which is less than 30 metres wide at its narrowest point. This slim point of entry and exit made it appeal as a location for a penitentiary as convicts that had managed to escape from Port Arthur were still faced with the difficult task of getting off the peninsula, as the British set up a dog line here in the 1830’s, with dogs chained at intervals to posts across Eaglehawk Neck to stop convicts. As well as the dogs, there were plenty of soldiers on duty watching for escapees.

From 1830-1877 Port Arthur operated as a penal settlement. Obviously most of those who lived part of their lives at Port Arthur were convicts – convicted of crimes in Britain and transported, and who committed further crimes once here, as it was a place of punishment for repeat offenders.  As well as convicts, many soldiers and civil staff were based at Port Arthur, with the population at times reaching more than 2000 convicts. In this time about 1100 people were buried on the Isle of the Dead - military and civil officers, their wives and children and convicts. Only 180 graves are marked.

Point Puer Boy’s Prison, across the harbour from the Port Arthur Penal Settlement, operated from 1834-1849 and was the first prison in the British Empire just for boys. Most were aged 14-17 but some were as young as nine. Much of the decorative stonework of the church at the penal settlement was done by these young inmates. The church had up to 1100 people attending each Sunday, but then it was compulsory! Probably a welcome break from the forced labour that included timber felling, ship building, flour milling, carpentry, shoemaking, wood turning, blacksmithing and bricklaying. 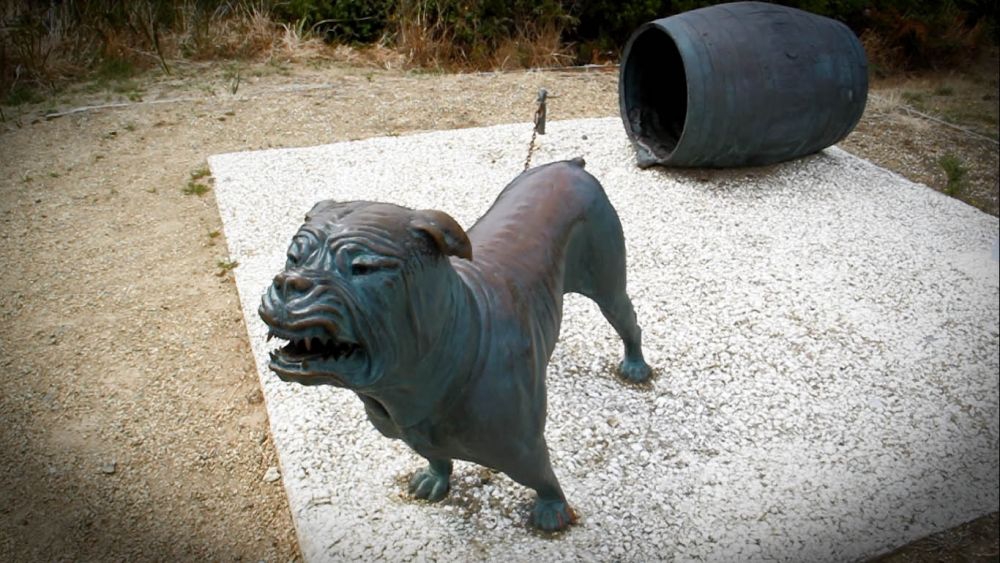 Many convicts served their time and went on to live useful and productive lives. I assumed that‘s what my convict ancestors did. Having a few convicts in my family tree - five that I know of - I’d never heard that any of them spent time at Port Arthur. But doing this article made me interested in reading up on them and reviewing what they did to be transported. Alas and alack! George McDonald at the age of 18 years had a crime spree in Wiltshire, England. In February 1819 he stole on five separate days some brass, a net, some spoons, a hat and a mare. Caught, convicted and sentenced to hang, he and his accomplice received a reprieve and were transported for the term of their natural lives. After arrival in Van Diemen’s Land, George received his ticket of leave in no time, lost it for drunkenness and cruelty to his bullocks, gained it again, received an allotment of land, married and built a house. In time, George became a tenant at the Wickford Estate, owned by Mr Henry Clayton. In 1847 George and numerous others were charged with stealing 100 bushels of wheat from Henry Clayton’s mill. Of course, George pleaded “not guilty” but the evidence of a trail of wheat from the mill to Georges house 260 yards away, the following of George’s wagon to Longford by Henry Clayton and the examination of wheat he sold to a Mr Reid along with wheat found at his residence led to a guilty verdict. So at the age of 45 years George McDonald found himself sentenced to 14 years, with two years to be served at Port Arthur Penal Settlement. This left his wife Delia to somehow manage with 4 children under the age of eight years and two older children.

Port Arthur Penal Settlement was based on English prison reformer Jeremy Bentham’s idea at the time of,”…a machine for grinding rogues into men”. For George it may have worked with no further convictions after his ticket of leave was granted this third time. Maybe the day in-day out breakfast of coarse ground flour mixed with water, and a bit of bread, followed by hard labour made him have no desire to ever return. The flour mill operated in the time he was there so he may have experienced stints on the treadmill, which turned the millstones to grind the wheat into flour. The treadmill could take up to 56 convicts in chains at one time. Who knows?

Contrast their lives with ours and be grateful you are free to leave whenever you like!

Entry is just a modest fee and your entry pass is valid for two days. It includes a 40 minute guided walk and a 20 minute ferry ride on the harbour.  There are buggies to shuttle people around who have limited mobility.  Extra tours can be taken to the Isle of the Dead and Point Puer (fee applies).

On entry you will receive a convict playing card – follow the life of a Port Arthur convict and discover how he came to be at Port Arthur. Children receive an activity book which will help them learn some facts in a fun way.

Your day of exploring doesn’t have to end when the sun goes down. Ghost Tours with lanterns operate after sunset which are brilliant, especially for teenagers! Good stories are told, in a great atmosphere. It’s a different way to learn some history. Ponder why William Riley murdered Joseph Shuttleworth with a pickaxe during construction of the church.

Or if you are really into spooky stuff a Paranormal Investigation Experience is run on the last Saturday of every month. You will receive a rundown on how to use the ghost hunting equipment, and then it’s off to various buildings to take readings and measurements.  The Paranormal Investigation Experience takes about four hours and finishes in the early hours of the morning. You must be 18 years or over to participate. 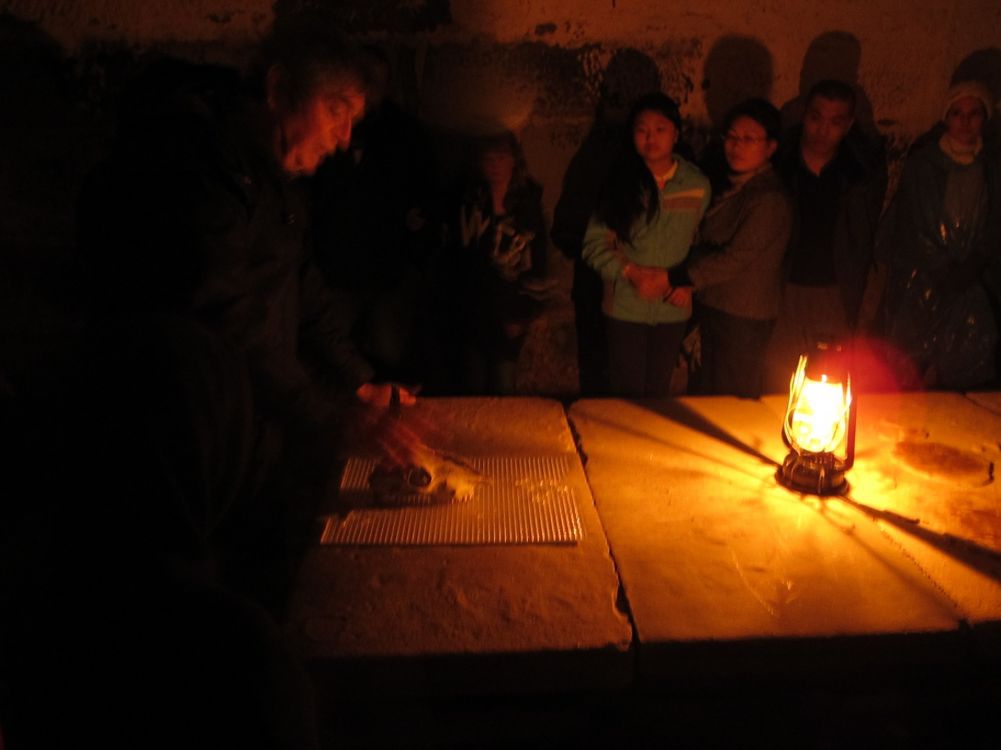