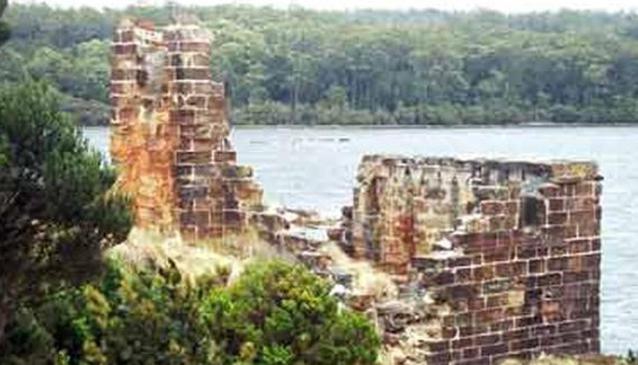 There is not a lot of evidence left on Sarah Island to show that about 1200 men and women convicts spent time here. However, by looking around you and out over the water, you can genuinely feel the inhospitable nature and remoteness of the location, especially if there's a cold wind blowing!

Sarah Island functioned as a penal settlement from 1822-1833. It was a place to send those who reoffended whilst still serving their time. A place harder to escape from not only because of its island nature but if you made it off the island there was just mountainous wilderness, impenetrable rainforest before you, with hundreds of kilometres to any settlements.

Some convicts that had useful trades accepted assignment to Sarah Island in return for shortening of their sentences.

Timber hauling and cutting was the mainstay of early convict labour. The highly prized houn pine was shipped out for its fine boat building properties, but this was problematic due to the hazardous nature of the harbour. So ship-building began to be undertaken on Sarah Island. The shipyards became very productive with over 100 vessels built during the life of the settlement. In its day it became the largest ship building yard in Australia. This included a 226 tonne barque, 5 brigs, 3 cutters, 7 schooners and 24 sloops - quite an achievement.

Sarah Island is now part of the Tasmania's World Heritage Area. It Island is accessible via cruise boats which operate on Macquarie Harbour out of the town of Strahan. There are several cruises every day of the year. Many have stopovers at Sarah Island. These cruises usually continue up the lower reaches of the beautiful Gordon River, and some take in the narrow entrance to Macquarie Harbour, known as Hells Gates.

Yachts can also be chartered to reach the island.