Tasmanian Devils are the largest carnivorous marsupials in the world.

Tasmanian Devils are the largest carnivorous marsupials in the world.  They are impossible to mistake for anything else.  They are as black as the night, often with a crescent of white on their chests and sometimes their rumps.  Being nocturnal, they’re not too easy to see in the wild, but if you are out bush-camping, especially in the West of the state, you might hear their unmistakable scary noises. Usually quiet, shy and solitary animals, they are famous for their rowdy feeding, when up to 12 may share a carcass.  The variety of fierce noises range from hissing and screeching to harsh coughs, sharp sneezes and snarls.  Named by the early European settlers, they were despised for their raids on poultry and were considered so bad that a bounty was placed on their head in the 1930s. 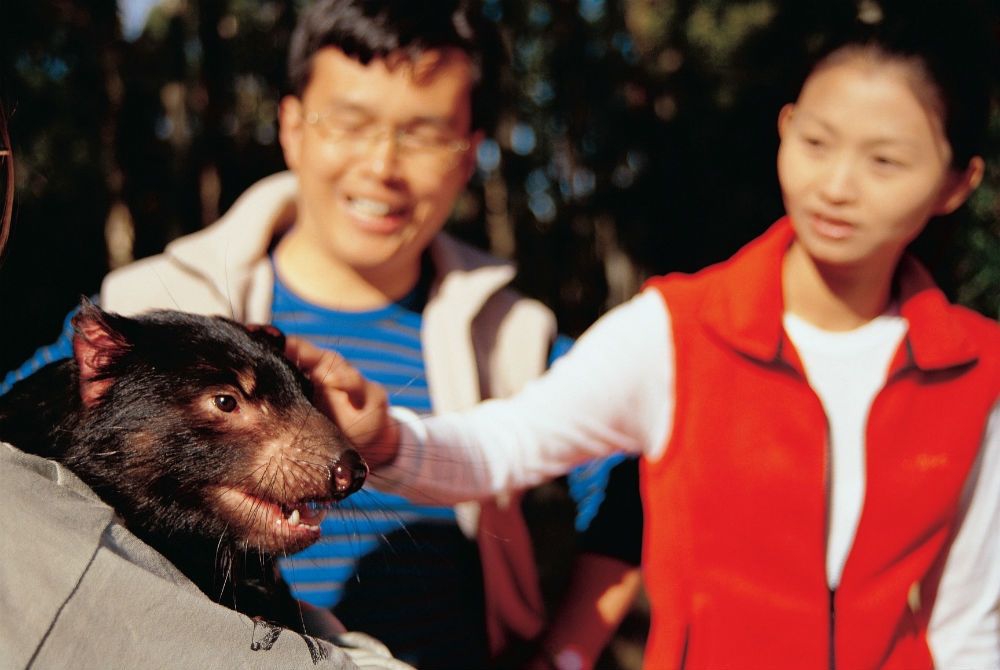 Adult devils have been known to eat young devils.  The latter are able to climb up trees to about four metres, an ability which enables them to protect themselves from bad-tempered or hungry grown-ups as adults have lost this skill.

Another two factors contribute to their ferocious reputation.  Firstly, their jaws are very powerful for their size, enabling them to crunch through bones.  They completely devour their prey – flesh, fur, bones and all.  They eat wallabies, small mammals, frogs, lizards, snakes, birds – basically anything that they can fit in their mouths.  Secondly, they are much photographed with their mouths open further than you would think possible, baring all their teeth for the world to see. A ferocious pose that says: “Keep away!”

But are they an object of the night, to be feared, and should we be thankful they are confined to Tasmania and not the whole Earth? Have we got it all wrong about Tasmanian Devils? Their façadeis about to be revealed. 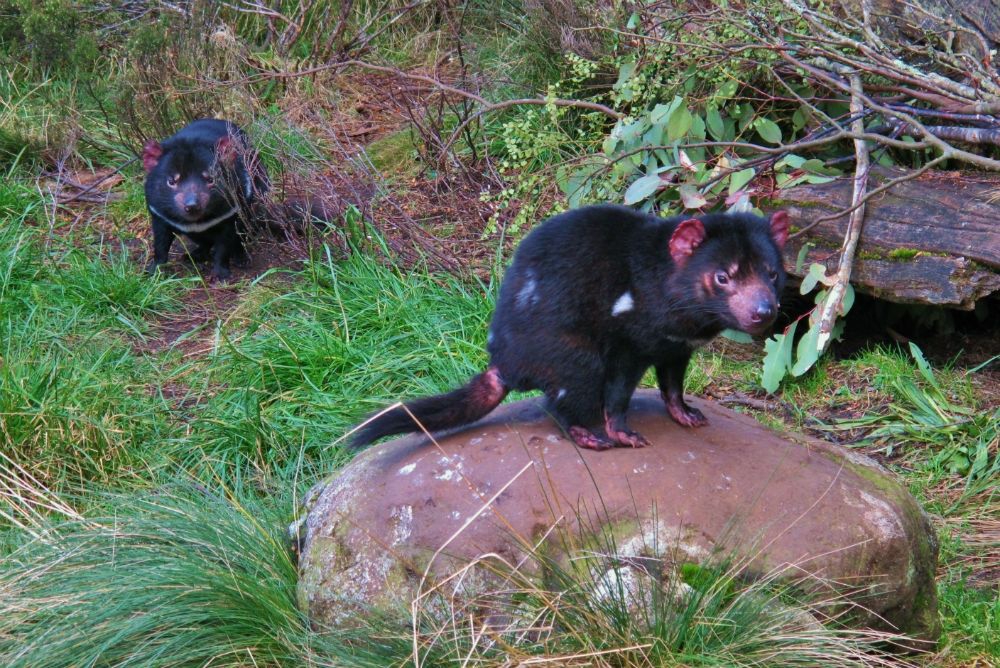 Tasmanian Devils are not dangerous to people and are only aggressive when it comes to food. They are about the size of a small dog.  Adult males are larger than females and usually only weigh about 8 kg, up to a maximum of 12 kg, with a height of about 30cm at the shoulder.  Much of their loud, raucous behaviour during feeding is bluff, a ritual to minimise actual fighting whilst feeding together.  Their scary, screechy noises are also employed during mating.  When they emerge from the rearward facing pouch young Tassie Devils are cute and some of the most loved of all the Tasmanian wildlife. Carers hand-rearing orphaned devils say they are just a delight, with some downright affectionate and wanting nothing more than a good cuddle.

As for the teeth-baring gape that looks so threatening, researchers feel it is performed more from fear and uncertainty than aggression.  In other words a smile for that weird camera-thing you are pointing at them!

People living on the outskirts of town do not lock up their dogs, cats, pet rabbits and so on for fear of the Tasmanian Devil – feral cats and stray dogs are more of a problem.  The devil is more of a scavenger than a mighty hunter.  It feeds on dead carcasses, no matter how rotten and smelly.  Probably the smellier the better, so they can use their excellent sense of smell to find some carrion rather than have to hunt prey.  They may well be nature’s vacuum cleaner, removing any sign of dead animals – remember they eat bones and all.  Their carnivorous nature and noisy eating habits are probably the only attributes that the Looney Tunes character, Taz the Tasmanian Devil, have in common with the real animal. 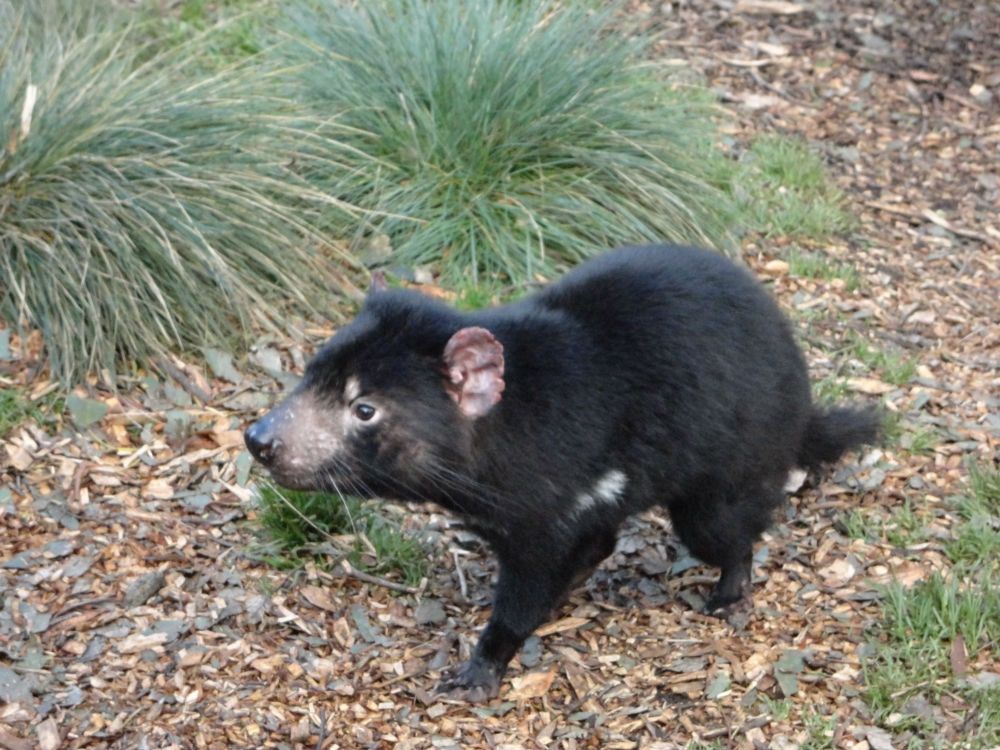 Sadly the Tasmanian Devil has been listed as endangered and its future is under threat.  In the mid 1990ss an aggressive facial cancer was discovered in devils in North East Tasmania.  Since that time it has spread and is believed to have killed 85% of the devil population.  The Devil Facial Tumour Disease (DFTD) causes tumours around the mouth, face and neck and is one of only three cancers known to be infectious.  It is being spread by biting.  Affected animals die within 5 months of the symptoms appearing.  Well organised efforts are being undertaken to ensure the survival of the species.  While research into the disease is ongoing, breeding programs are in place at the Tasmanian Devil sanctuaries of Trowunna Wildlife Park near Mole Creek, Devils at Cradle near Cradle Mountain, and The Devil Conservation Park on the Tasman Peninsula.  A Devil’s Ark breeding program has been set up interstate in New South Wales and the idea of placing disease-free devils on Maria Island is being considered.

Needless to say the Tasmanian Devil is wholly protected.  Take extra care driving on roads after dark.  With a high wildlife density many animals stray onto roads and some of them become roadkill. This in turn makes it attractive for devils to venture onto roads.

For more information about our devils and our island in general, be it things to do, places to go or attractions to see, come and visit us at My Guide Tasmania.